The 5,500 acres tract of land that was to be known as Apollo Beach was first deeded to Paul Dickman in 1920 and used annually for farming and grazing pasture and considered uninhabitable. In the early 1950s, Dickman negotiated the sale of the land to three men from New York: Turner, Dean and Clark. They renamed the land “Tampa Beach” and construction began on the Flamingo Canal near U.S. 41 and proceeded to Fairway Blvd. In 1957 Francis Corr purchased the land from the N.Y. businessmen who ran out of money. Corr decided the area should be called “La Vida Beach”. Supposedly, in 1958, Corr’s wife Dorothy suggested a new name “Apollo Beach”. This was for the area’s greatest benefit – sunshine. Today Apollo Beach is a thriving waterfront community with year-round boating, fishing, and other water activities. The Big Bend Power Station provides power to the Tampa Bay Area and warm waters that attract the manatees and sting rays. The Big Bend Power Station and Manatee Viewing Center are both notable landmarks of Apollo Beach. 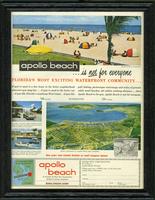 Title
1961 Apollo Beach is not for everyone.
Abstract/Description
Marketing brochure for Apollo Beach created by Flora Sun with Wilbur E. Jones, from Miami, as President. Flora Sun acquired Apollo Beach from Francis J. Corr in 1960, (with Paul Dickman also holding a mortgage on the property.) Flora Sun quickly became embroiled in a financial scandal and could not meet its obligations. After a protracted bankruptcy and foreclosure action, the property was returned to Francis Corr. Flora Sun did very little development of Apollo Beach while holding the property. 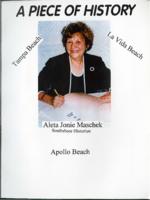 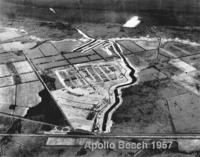 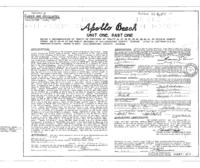 Title
Apollo Beach Subdivision Plat Maps: 1958-1959.
Abstract/Description
Initial Subdivision Plans for first three sections of Apollo Beach from developer Francis Corr. Filed in 1958 and 1959. These sections of are bound by the Flamingo Canal on the north, and Miller Mac Road on the south with the land coming to a point at US 41. This is generally known as the "F Streets" plan, as most of the street names begin with the letter F. 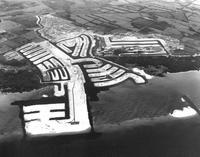 Title
Looking East: 1960.
Abstract/Description
This is the same area as in the Looking West: 1960 picture but from the opposite view. Clearly evidence of the dredge and fill technique being used to create AB. Compare this photo with the 1957 photo to show the addition of the dredged land, creating finger canals. 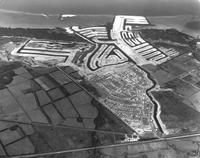 Title
Looking West: 1960.
Abstract/Description
Looking West at very early Apollo Beach development. At the left side of the developed land is today's Miller Mac Road. On the right, is the Flamingo Canal. US 41 is at the bottom of the page. Note the early sales of lots in the first phases of the property, in what is known as the "F" Street section as most streets begin with the letter "F." Also note the early dredge and fill at the bayside section of the development, which created Apollo Beach's signature finger canal land development. 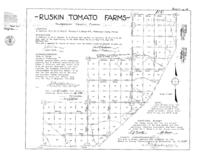