In 2008, one hundred years after the founding of Ruskin, Hillsborough Community College opened its fifth campus here, bringing higher education back to a region, in a town whose very existence was predicated on the establishment of a college. A few years later, in 2013, Dr. Arthur "Mac" Miller, a retired college professor and grandson of the founder of the town of Ruskin, approached Hillsborough Community College with the idea of starting a project to formally document and preserve local history and to make it available to the public.

After careful consideration of the idea, the leadership at the SouthShore Campus of Hillsborough Community College made the decision to move forward with the project and to expand it to the local histories of all the communities in our service area. The initiative was named the Southern Hillsborough County Historical Connections Project and was tasked with the documentation of the local histories of the towns south of the Alafia River.

Title
"Jolly Dolly" the Ossified Girl.
Abstract/Description
Dolly Reagan (AKA Jolly Dolly, The Ossified Girl, was born in Saskatoon, Canada in 1919. She began her sideshow career in the early 1940s. She could neither stand nor walk. However, she had command of a few fingers, which helped her control an electric wheelchair. She suffered from Muscular Dystrophy and ankylosis which kept her body rigid. She married three times (a juggler, a ride foreman, and a sideshow manager/magician.). She died in 1994. 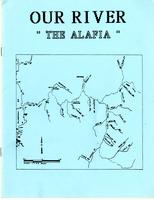 Title
"Our River" - The Alafia.
Abstract/Description
This booklet was created by CARP (Citizens for Alafia River Preservation) to distribute to second grade students in Riverview to teach them about the Alafia River, and create preservation awareness. 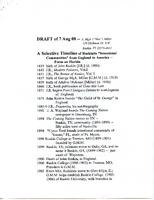 Title
1819-1967 time lines.
Abstract/Description
This timeline was prepared by "Mac" Miller, highlighting selected dates of early Ruskin History and the larger history of "Intentional Communities" founded upon the ideas developed by John Ruskin. 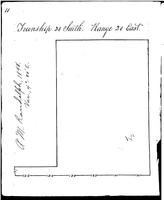 Title
1843 External Boundary Survey of Township 30S, Range 20E.
Abstract/Description
This initial external boundary survey of T30S, R20E is irregular due to the reserved lands (by the Federal Government) set aside for Fort Brooke in Tampa. Originally, the military reservation, which includes the mouth of the Alafia River, as 16 miles square, and no settlers were permitted inside this reservation without the specific permission of the US Army. The reservation was reduced in size in July 1848. 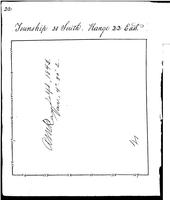 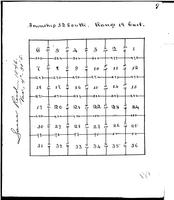 Title
1846 Sectional Survey of Township 32S, Range 19E.
Abstract/Description
Sectional Survey of T32S, R19E, which includes the eastern part of Ruskin to Sun City Center and then south to the Manatee County line. This sectional survey was requested by the Internal Improvement Fund for the STate of Florida preparatory to selling lands to raise money for the new state of Florida. 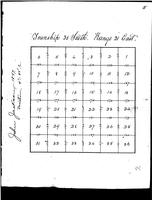 Title
1847 Sectional Survey Map of Township 30, Range 21E.
Abstract/Description
This sectional survey map was created by Tampan, John Jackson, at the request of the Internal Improvement Fund of the State of Florida in order to further subdivide the 1843 survey into land preparatory to land sales. This land encompasses today's Lithia and Pinecrest. 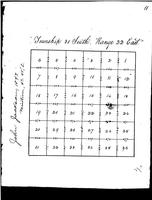 Title
1847 Survey Map of Township 31S, Range 18E.
Abstract/Description
Survey by John Jackson of Mangrove Point. Note only land mass is in the SE 1/4 of Section 36, where about half the land shows trees. The rest is either marsh or inundated, per Jackson.

Title
1847 Survey Map of Township 31S, Range 19E.
Abstract/Description
This 1847 Survey map delineates land that lies on Tampa Bay, north of Ruskin, in roughly the area where today's Apollo Beach is located. Note the marking of salt marshes on the western edge of the map, and the rather extensive forestation (indicated by tree marks) inland. This can give an idea on the character of the land before many settlers arrived.

Title
1847 Survey Map of Township 31S, Range 20E.
Abstract/Description
These lands were surveyed by Tampa surveyor, John Jackson in 1847 and include lands east of Apollo Beach, and today's US 41, in an area roughly bounded by Big Bend Road, US 41, 19th Street (Ruskin) and US 301. Note the trail marked as "Trail from Manatee to Tampa" running in a rougly NE direction from Section 30 to Section 4. Also note that there is some land marked as "savanna" and the tree markings are more numerous as you go east in the Township. 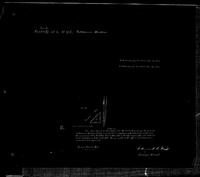 Title
1847 Survey Map of Township 32S, Range 17E.
Abstract/Description
This is a small section of land at the extreme SW corner of Hillsborough County. It sits at the county line with Manatee County, at this time, and has likely been changed through dredging. 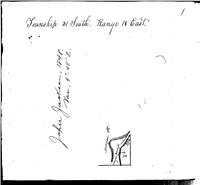 Title
1848 Survey of Township 31S, Range 18E.
Abstract/Description
Survey of Mangrove Point at the SE Corner of the Township. Note the phrase "mangrove, impossible, inundated." This is a likely reference to John Jackson's inability to survey further due to the terrain. 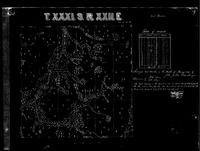